Top Posts
Best Kitchen Knife Sets Reviews 2021 | Buying...
What is a Dado Blade– Who and Why...
How to Use a Dado Blade – (Setup...
How to Cut Concrete Pavers – Know Before...
Best Dado Blade Set Review 2021
Best Woodworking Clamps Reviews 2021
Screw Gun vs Drill | Which is Better?
Hammer Drill vs Rotary Hammer | Head To...
Plunge Router vs Fixed Base Router | Who...
Shaper Vs Router | Which One Should You...
Home Blog Plunge Router vs Fixed Base Router | Who Will Be The Winner?
Blog

If I asked you to name one tool from a woodworking workshop, what would you name? Your idea might not be the same as mine, but there is a good chance, it would be ‘a router.’ Why would it be a router?

Because it is a very common and versatile power tool, but there are many varieties and different purposed routers out there. In this article, I will compare a plunge router vs fixed base router.

Let me break it down for you.

What Is A Plunge Router?

The routers which are plunge-able or rather one that you press downward to achieve the desired depth for your workpiece is a plunge router. The router body can ride up or down on the router base.

A spring always pushes the router body upwards, you push it down manually and then lock the body.

What Is A Fixed Base Router?

Once you set and lock the cutting depth, it’ll stay there until you take a break from your work to go and adjust it.

Now, adjusting a fixed base router is not as simplistic as a plunge router. That’s a downside, But this one is great for precise cutting.

Similarities Between A Plunge Router And A Fixed Base Router

A plunge router and a fixed base router are quite similar to each other in a few ways. Like they are both quite mobile and easy to move around. The simple mechanism makes room for easy maneuverability.

As for functionality, both the machines can be used for pretty much the same tasks. Cutting, channeling, grooving, etc.

Their power consumption/power output is also pretty similar. Overall, both the machines are pretty versatile, and you can easily manage to get by with either one of them.

Difference Between A Plunge Router And A Fixed Base Router

Now, let’s be real. When two objects are pretty close to each other, their similarities do not get the spotlight, and It is their differences that make more sense because that helps to identify and furthermore, guide us to use the objects at their strength.

On a plunge router, the handles are placed with the router body and thus move up and down. Generally, they are never at the bottom position, and that means the handles are always somewhat at a higher position. This results in lesser stability.

On a fixed base router, on the other hand, this is not the case. The handles can be placed very close to the ground since there are no moving parts like the plunge counterpart. The lower handle allows you to maintain contact with the ground while working, thus offering more stability.

Another noticeable difference is their center of mass. This one is easy to see, as well. A big part of the weight of the router comes from its motor. And the motor sits much higher on a plunge router. This makes the router prone to tilting, especially when working on the edge of a piece.

A plunge router dominates this sector, as long as you can handle your machine. A plunge router suits itself well, regardless of whether you are working on the edge, in the center, channeling, templating, or whatever you desire.

A fixed base router has a slight limitation. Because of the structure and working mechanism of a fixed base router, it cannot be used in cases when you need to approach from the above, such as templating or designing.

Which Router Is Better?

There is no obvious better or worse out of the two here. Both types excel in their respective fields. A plunge router is better if you are handling trickier tasks like templating or grooving with variable depth. The plunge mechanism opens up a new window.

A fixed base router may not get you by in all situations, but where it does, it does really well. The lower center of mass and the lower handles give you appreciable stability.

But if you are starting anew and want to add a new tool on your belt, there are some models available that come with both a plunge base and a fixed base but only one motor, you simply switch between the two.

Otherwise, you choose based on your needs and the types of work you perform. Both have their ups and downs.

Shaper Vs Router | Which One Should You Get? 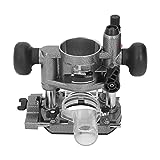 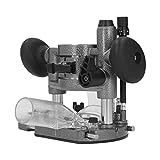 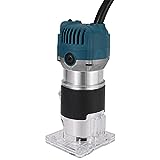